Nugents celebrate the history of land while planting for the future 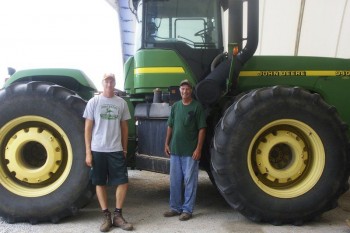 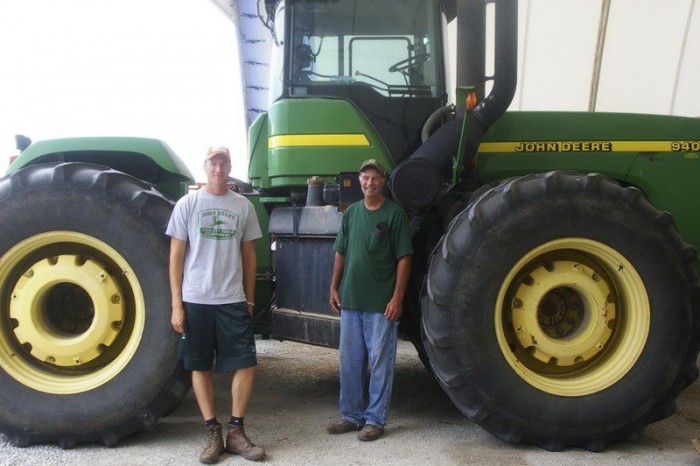 Tom Nugent and his son, Thomas, take a lot of pride in the land they farm in northern Daviess County. Much of that ground is located between State Roads 57 and 58 near Elnora and a good portion of it has been farmed by the family for years.

"This ground has definitely been in the family for at least 100 years," said Tom, as he looked around the farm surrounded by glossy, emerald green field of corn that four generations of Nugents have now farmed. "Dad was born here in 1916 and he lived here on the farm almost all his life."

His father, Tom said, was conservative when it came to most things, including buying land.

"He'd helped his dad pay off the farm and he knew how long that had taken," he said. "He didn't want to have to do that again."

So when Tom started buying his ground he did it a lot like the old Johnny Cash song, "One Piece at a Time."

Known as Woodland Farm, Tom bought that house and accompanying 80 acres from his maternal grandparents, Norvin and Nellie Marie Holt. Over the next several years, Tom worked to restore the stately home originally constructed by William H. and Jennie Swinda in 1911. In 1989, when Tom married Carol Gainey, they moved into the home and later welcomed Thomas and Lewis.

"Norvin and Marie bought the house and farm after they had to sell their home in Martin County near Burns City," said Carol, who keeps up on the family history. "Their property became part of Naval Surface Warfare at Crane."

In 1978, Tom bought his next parcel of land and it too, had already been farmed by family members.

"That was Uncle Paul's farm," said Tom. "Dad thought I'd paid way too much for it back then."

But around the time Tom bought that land, declines in agricultural products around the world meant increased profits for many farmers during the 1970s. With those increased profits came increases in land values and lower interest rates. Things were going well and then the 1980s came. Many farmers were forced to file for bankruptcy and lost everything but the Nugents were able to ride out the storm.

"It was ground that hadn't been available for 40 years," he said.

While the Nugents focus on corn, soybeans and a few acres of wheat now, at one time in the 1930s, Tom said his family toyed with raising watermelons.

"It was pretty short lived," he said, recalling the story of selling the melons. "I think they got paid for the first three loads but the fourth load, they were told was overripe and never got paid."

Always focusing on preserving their land for future generations, Tom and Thomas no-till their crops and have found, thanks to yield monitors, that many improvements they've been making to their ground has resulted in better crops.

"We found that putting tile in has made a big difference in the fields," said Thomas, who said he and his father spend much of the time after the harvest is complete laying tile and preparing equipment for the next planting season.

"The last two years, we've had really good bean crops," said Tom who served on the North Daviess School Board for a number of years and is currently serving on the White River Co-Op Board, the First National Bank of Odon Board and the Smothers Creek Ditch Board. He's also a volunteer firefighter and sponsors Junior Achievement in the schools among other things.

"That's the nice thing about farming. The flexibility you have to do other things after the crops are in the ground and before harvest time," he said, adding that when Thomas and Lewis were in school, farming also afforded him the flexibility to help coach their teams. "And I just like to watch things grow."

It's that flexibility Thomas, who is North Daviess assistant boys basketball coach, also enjoys about farming.

"It's pretty much sink or swim based on the work you put in," he said. "But you can come and go as you please for the most part. Farming is either the best job in the world or the worst one. It all depends on what you put in.