Starting the next chapter 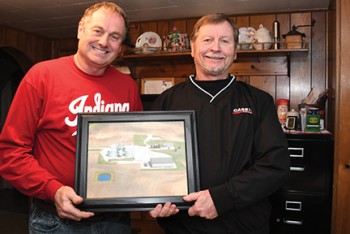 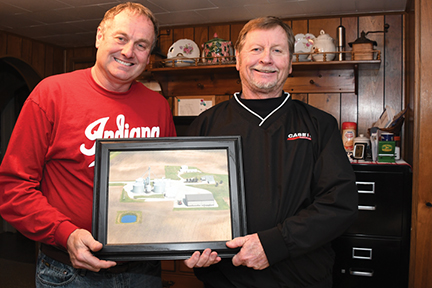 Retiring from farming is not as easy as it sounded to brothers Bill and Mike Burkhart.

The Plainville brothers, who had farmed for nearly 50 years, retired from farming at the conclusion of the 2019 harvest...at least the brothers thought they had retired then.

"Retirement really doesn't feel like retirement because we still are hauling grain, just like we had done every year we were farming," noted older brother Bill. "But that will change soon."

And the change, while welcome, also has a bittersweet root.

"We both are going to miss the work," Mike said. "There just is something special about working a field; starting with a blank slate then seeing the results at harvest."

Seeing the results was just part of what the Burkharts learned early in life when they came to the realization farming is not an occupation, it's is a way of life.

Farming was a family affair as father, Ernie, served as the farm's patriarch, determined the way forward and led by example, while mother, Mickey, not only was an equal partner relative to work but also had the additional duties of running the household.

Ernie set the standard for the sons and engrained in them the work ethic required of a farmer as a caretaker of the land; he also ensured his sons understood the need to be true to their word, word that was sealed with a handshake.

Lessons taught by Ernie stuck with the sons their entire lives.

"We really didn't mind the work," said Mike, "or the hours because we knew the work had to be done."

Even though they didn't mind working as much as 3,000 acres of corn and soybeans as well as tending to livestock, farm life wasn't what either brother had in mind relative to a career field. Bill aspired to be an accountant as he loves working with numbers. Mike envisioned a career as a teacher as he has a penchant for working with people.

Pursuit of other careers ended abruptly in 1986 as a heart attack ended Ernie's life at the very place where the family had so much life — the dining room table.

And, keep going is exactly what the Burkharts did.

"It wasn't easy, but we had a lot of help from our neighbors," Mike pointed out.

That help from neighbors is something the brothers appreciated and reciprocated.

"One of the great parts of being a farmer during the 80s was the support farmers gave each other," Bill said. "We were there for one another."

"I couldn't imagine farming without Mike or farming with someone else," Bill said. "And I wouldn't have wanted to have farmed with anyone else but Mike."

Farming as a family affects all in the family, and both brothers are quick to point out the contributions made by their wives and children. Bill is aware of the sacrifices made by wife Ruthanne and son, Blake, and Mike knows, too, the assistance provided by wife Kim, and children: Ryan, Travis, Evan and Jenae.

"Every family member had a hand in any of our successes," Bill said. Bill and Mike both note that the children weren't enthused about work but understood the work had to be done.

The brothers understood as well that farming likely was not going to be a Burkhart legacy, and that, in part, was by design.

According to the brothers, they agreed that their children would go to college and would work away from the family farm for 10 years. Conversation about continuing the family farm would occur only after the child/children completed college and worked outside of the farm for a decade and had a desire to continue the farming tradition.

Lack of conversation about a legacy led the brothers to talk seriously about their own retirement.

Many factors played into the decision to make 2019 the last year of farming for the brothers, and both are satisfied they made the right choice for them.

The brothers have tired of most of the business aspect of the farm and are glad to be shed of that. They also are glad to be free of the worry of rising equipment costs, advancing technology and the diminishing margins for a bushel of grain.

Both Burkharts know how tight margins can be for a small farmer and understand what some farmers mean when they say they "hope to break even because they could sure use the money.

Money, though, was not the driver for the farming duo.

"Only someone who has worked the land can appreciate the feeling you get when the job is finished," said Mike.

Their job is not yet finished, but they can see the end from here. Neither will feel retired until the final load of grain is emptied.